Everyone is interested in a natural aphrodisiac — even Oprah. Using nature’s gifts to improve your sex life sounds great, right? People around the globe agree and have been boosting sexual desire with ethnobotanicals from almost every continent.

Some of the uses are stranger than others, though. Supposedly women used to rub powdered basil on their private parts in order to attract men. And Tibetan monks had to abstain from garlic because of the passion it would apparently inflame. Yep, plants are pretty powerful. (Or at least the placebo effect is.) Let’s take a quick trip around the world to dip into the history of several natural aphrodisiacs — no passport required. 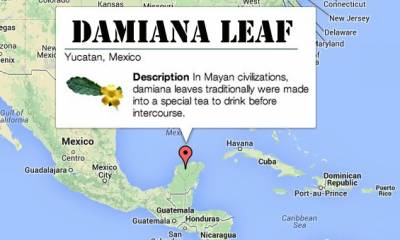 Let’s travel to the land of the ancient Mayans, spanning the area from southern Mexico through Belize, Honduras, El Salvador, and Guatemala. In Mayan civilizations some 4,000 years ago, damiana leaves traditionally were made into a special tea to drink before intercourse. (Call it “NOT Sleepytime Tea.”)

Damiana has been used historically for “treatment of sexual disturbances,” according to a publication by the Association of Nurses in AIDS Care. This is because some people believe the alkaloids in damiana increase genital circulation and sensitivity. Throughout the ages, people have used the herb in the hopes of increasing sperm count, although research is lacking. 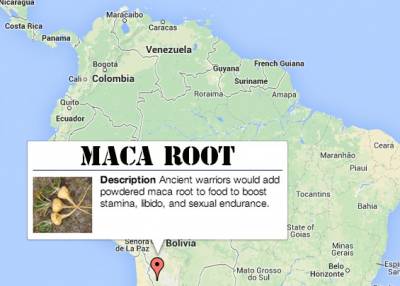 Let’s fly down to South America’s western coast, where we’ll pause in the Andes Mountains of Peru. Starting with the Inca people in the region some 3,000 years ago, Peruvians have cultivated maca root (Lepidium meyenii), which they thought was straight from the gods. In ancient times, warriors would add powdered maca root to food to boost their stamina, and it was found to also stoke libido and sexual endurance. (It may look like a radish, but maca root spiced up more than their salads.) When the Spanish came to the region, they were so excited about maca root that they sent some back home to royalty in Spain.

For a slightly more recent testimony, Dr. Oz reports, “One small study found that this herb can have psychological benefits, like decreasing anxiety, that may help reduce sexual problems in postmenopausal women.” Oz is referring to a 2010 literature review that found maca root helped patients with erectile dysfunction or menopausal symptoms, although the article admits more research is needed. 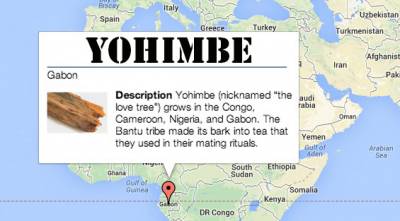 Hop back in the plane and let’s take a transatlantic trip to West Africa, home of yohimbe (Pausinystalia johimbe), which grows in the Congo, Cameroon, Nigeria, and Gabon. “The herb comes from the bark of a West African tree and has been shown to cause erections in men unable to achieve them,” writes the Science Channel. “Yohimbe is thought to work by stimulating certain nerve centers in the spine that control erection and was approved for use in some prescription drugs.” Back in the day, the Bantu tribe of West Africa made shavings from the inner tree bark into tea that they used in their mating rituals. It even earned the monicker “the love tree” after German missionaries found out about the natural aphrodisiac in the 1800s.

Yohimbe’s main active component is the alkaloid yohimbine. Similar to the effects of ginseng, yohimbine dilates blood vessels, which is key to penile erection. A recent review of the scientific literature was “cautiously positive” about treating erectile dysfunction with yohimbe and ginseng. Yohimbe isn’t just for men, though — the herb was also used historically to make women feel more sexy and make women’s private parts more sensitive. 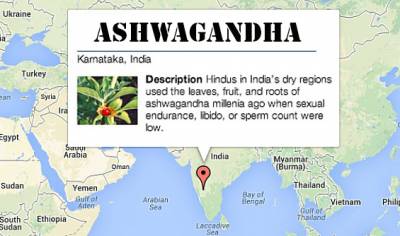 Next we’ll jet east to India, the birthplace of traditional Ayurvedic medicine: the oldest medicinal system in the world, dating back at least 3,000 years. The ancient Hindus approached health holistically, believing that imbalance led to disease. Accordingly, Hindus in India’s dry regions used the leaves, fruit, and roots of ashwagandha (Withania somnifera) when sexual endurance, libido, or sperm count were lacking in order to bring the body back into balance.

Ashwagandha means “horse smell” in Sanskrit, as its roots have a sweaty equine odor — plus, back then people thought consuming the roots of the natural aphrodisiac in dried or powdered form would give them the virility of a mighty stallion. (There is some scientific basis to that: A 2003 study found that in men, ashwagandha increases nitric oxide, a gas that opens up penile blood vessels and thus improves erectile function.) In the past, Hindus also used the herb to relieve stress and treat other imbalanced physiological functions, which makes sense when you consider its nickname: Indian Ginseng. Speaking of… 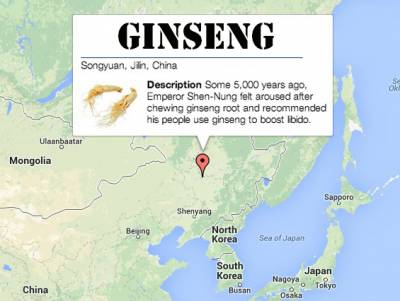 Our last stop on this international tour of natural aphrodisiacs takes us from India to the mountains of Manchuria, a region in China’s northeastern tip. That’s where Chinese emperors first used ginseng some 5,000 years ago. Emperor Shen-Nung in particular, a mythical figure said to be the pioneer of Chinese medicine, felt aroused after chewing ginseng root and recommended his people use ginseng to up libido.

We know today that Shen-Nung wasn’t that far off. Citing recent research in the Journal of Urology, Dr. Oz writes, “Menopausal women who consumed three grams of Korean red ginseng daily reported being more aroused during sex.” Ginseng also helps with two of the three big “love chemicals,” dopamine and norepinephrine, neurotransmitters that play a role in romantic feelings. And a 2008 review of scientific literature found red ginseng to be more effective than a placebo in treating erectile dysfunction.

As you can see, today’s researchers are just starting to find the scientific basis behind herbal aphrodisiacs that date back 5,000 years. They’re confirming the beliefs of civilizations around the world: Nature can make things sexier. We might not know exactly how they work, but plants play a pretty valuable role both on the plate and in the bedroom. That’s hot! (And I’m not just talking about steamed broccoli.)

Have you tried any natural aphrodisiacs? Do you want to?