Natural ways to quit smoking can be more attractive than a patch or nicotine gum. After all, they’ve been around much longer and lack the additives and strange ingredients pharmaceutical products often contain. Since tobacco’s from nature, it only makes sense that decent tobacco alternatives would be found in the wild too.

Some people use herbs as cigarette substitutes to replace tobacco, relieve nicotine cravings, soothe the no-cigarette jitters, and eliminate toxins. Check out this table for an overview of herbs’ believed effects: 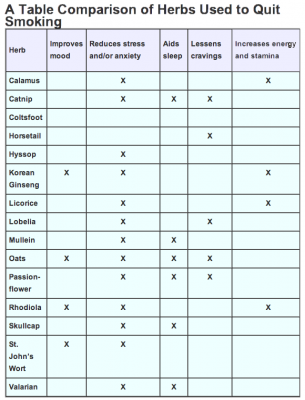 During the process of quitting smoking, it’s best to drink plenty of water and not stress. Kicking any habit is a big deal and will feel more normal as time goes on. Read on to learn more about natural ways people have tried to quit smoking — and let me know what you think in the comments.

Oatstraw (Avena Sativa), aka wild oat extract or green oats, is one of the most popular herbs to help with tobacco cessation. (It’s not the same thing as your morning oatmeal; it’s the unripe, green part of the plant.)

In India, Ayurvedic health practitioners have used oatstraw to help recovering opium addicts suppress their cravings. A study published in Nature in the early ’70s validated this, showing that oatstraw could treat both cigarette and opium addiction by helping the body detox and lowering the body’s desire for nicotine. A study five years later in The International Journal of Clinical Pharmacology and Biophamacy questioned these earlier results, showing oatstraw effectively treated light smokers but not heavy ones.

In any case, some people use oatstraw to lower stress, sleep better, and be less anxious. Like turkey, it contains the amino acid L-tryptophan, which is known to cheer people up and calm the nerves. 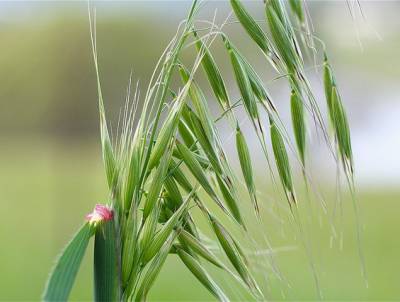 Like oatstraw, catnip (Nepeta cataria) promotes better sleep. That’s right; it isn’t just for cats! It may drive your kitty wild, but scientists think this ethnobotanical actually has the opposite effect on humans. Catnip is believed to quell cigarette cravings, particularly when a small amount of its liquid form is placed on the back of the tongue.

Also in unexpected natural ways to quit smoking: peppermint. Not only good for freshening your breath, the menthol in peppermint may stifle the urge to smoke. The natural healing specialist Annette McDermott cites a Wheeling Jesuit University study that demonstrated “people using a peppermint inhaler achieved similar results in relieving smoking urges and cravings as those actually smoking.” (No word yet on whether candy canes have the same effect.)

Lobelia (Lobelia inflata) is used to trick the brain into thinking it’s getting nicotine without actually continuing the addiction. (Sources say lobelia works best after someone has stopped smoking; beforehand, it may actually make nicotine-related side effects worse.) Plus, it supposedly makes cigarettes taste bad — an added bonus. 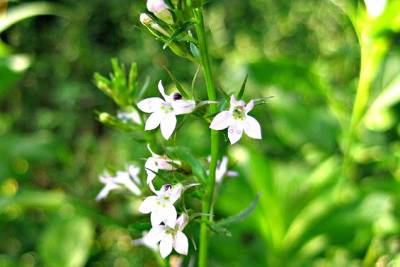 This feathery fern relative is also called bottlebrush. In addition to being a good source of calcium and potassium, horsetail contains a tiny bit of nicotine (less than one part per million), so in the past people have used it to make cravings and other symptoms of withdrawal more bearable after quitting smoking. Horsetail also functions as a diuretic and has been used historically to flush toxins from the body. (Note, however, that it’s toxic to children.)

Green tea is one of the more surprising yet effective natural ways to quit smoking. As part of a 2012 study in Science China Life Sciences, “A Revolutionary Approach for the Cessation of Smoking,” researchers replaced the tobacco in cigarettes with green tea and a filter, finding it helped smokers kick the habit. (You’ll probably want to drink it instead, maybe instead of your morning coffee if you usually smoke then.) An amino acid found in green tea, L-Theanine, is not only relaxing but also can repair smoking’s damage to the body by replenishing vitamins and fending off free radicals. It’s also said to lower smokers’ risk of lung cancer.

Chewing on ginseng or licorice is one of the most popular natural ways to quit smoking. One herb enthusiast, Cedar Stevens, writes, “I got ginseng roots, about three inches long, and I would chew on them when I drank coffee or beer, or at parties. Ginseng tastes good with both coffee and beer, and it is a mellow, nutritional stimulant, which helps you to be more social, more extroverted.”

As for licorice root, don’t think of the movie theater candy (although, who knows, maybe Twizzlers can satisfy your oral fixation). Licorice root is an adrenal tonic, demulcent, and expectorant, so the herb might help with your energy level and lung irritation. Chewing on licorice root keeps your mouth busy, too.

Smoking isn’t just about the addiction — people smoke to steady their nerves. Thankfully, you have plenty of non-addictive options. As explored above, people have traditionally used catnip to relax (despite its stimulating effects on cats). The nepetalactone in catnip is said to treat withdrawal symptoms like headaches, stomach aches, insomnia, and anxiety, according to WebMD. 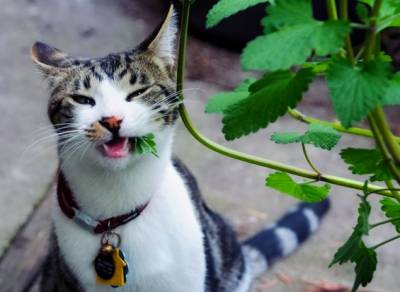 Chinese red ginseng has a plethora of health benefits, one of which is helping people de-stress (no doubt contributing to its enduring popularity since 2,000 A.D.). People are often on edge after quitting smoking, and some believe ginseng tea helps them relax during the withdrawal period. It’s also said to create a clear, alert mind, which may help with the side effects of smoking cessation.

Valerian root (Valeriana officinalis) and skullcap (Scutellaria lateriflora) are also sometimes used to treat anxiety related to quitting smoking. As I mentioned in a post about herbs that fight insomnia, valerian boosts the brain’s production of gamma aminobutyric acid (GABA), a natural relaxation agent. As a nervine, skullcap relaxes the mind and muscles, supposedly easing someone into a less anxious state.

According to Herbs for Health, “Smoking can overtax the body systems that filter and eliminate toxins. Once you quit, toxins are released from storage tissue such as fat and need to be eliminated.” Specifically, after you stop smoking, it’s common to have coughing fits as your body tries to expel all of the excess mucus that built up in your lungs. Hyssop (Hyssopus officinalis) is said to help because it’s an expectorant and cough suppressant. People use this purple plant in tea form to calm their nerves and heal their lungs and respiratory tract.

Another expectorant, Coltsfoot is also known for its lung-cleansing properties. You can thank its mucilage, a gooey plant-made substance that can treat inflamed bronchial passageways.

Like ginseng, ginger is truly an all-star. Not only have people used it historically to sweat out toxins, but it is said to quiet an unhappy stomach and get rid of unneeded mucus. (Plus, there’s also the chewable factor, if chomping on licorice or ginseng roots weren’t quite your thing.) Historically, people have also sipped ginger tea or consumed it in capsule form.

Have you tried to quit smoking? Let us know what’s worked for you in the comments below.

Talk to your physician first if you are pregnant, breastfeeding, diabetic, or taking any medications.