Nymphaea caerulea, known primarily as blue lotus (or blue Egyptian lotus), is a water-lily in the genus Nymphaea. Like other species in the genus, the plant contains the alkaloid apomorphine. It was known to the Mayan and Ancient Egyptian civilisations.

The effects of N. caerulea makes it a likely candidate (among several) for the lotus plant eaten by the mythical Lotophagi in Homer’s Odyssey. It has been used to produce perfumes since ancient times; it is also used in aromatherapy. 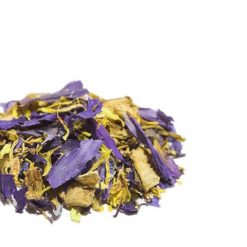