Different species of the Passiflora grow in practically every part of the world.

Known also as the passion flowers or passion vines, is a genus of about 500 species of flowering plants, the type genus of the family Passifloraceae. They are mostly vining, but some grow as shrubs, and a few species are herbaceous. The monotypic genus Hollrungia seems to be inseparable from Passiflora, but further study is needed.

Most species are found in South America, eastern Asia, southern Asia and New Guinea. Nine separate species of Passiflora are native to the United States, found from Ohio to the north, west to California and south to the Florida Keys. Four or more species are also found in Australia and a single endemic species in New Zealand. New species continue to be identified: for example, P. pardifolia and P. xishuangbannaensis have only been known to the scientific community since 2006 and 2005, respectively.

Some species of Passiflora have been naturalised beyond their native ranges. For example, blue passion flower (P. caerulea) now grows wild in Spain. The purple passionfruit (P. edulis) and its yellow relative flavicarpa have been introduced in many tropical regions as commercial crops.

The passion flowers have a unique structure, which in most cases requires a large bee to effectively pollinate. In the American tropics, wooden beams are mounted very near passionfruit plantings to encourage carpenter bees to nest.

At Herb Stomp you can also find Passion Flower Powder.

Safety: should not be used during pregnancy or lactation. This herb may increase the effects of blood-thinning medications, sedatives, tricyclic antidepressants and anti-seizure drugs.

Be the first to review “Passion Flower” Cancel reply 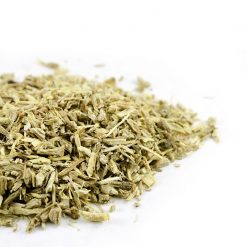